Last week was a truly memorable occasion in our family. My daughter entered medical school. The White Coat ceremony was lovely, joyful and dignified. I don’t often write about my personal life, but this one triggered a few thoughts that I would like to share, if you can indulge me. 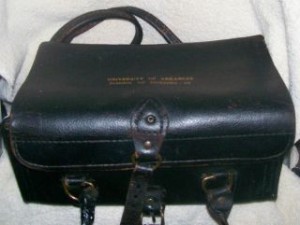 metime in 2009, I began blogging about the promise of electronic patient records – all info, all the time, where you need it, when you need it at the point of care. What is most memorable about those early essays was developing the character Health System Ed, a little blue doctor holding an iPad.

In Ed’s first incarnation, he was holding a clipboard. And that just seemed so wrong. It was everything Ed was not about – static paper records stuck in a manila folder in a wall of files. So I went to an artist and we revised Ed and gave him an iPad. And yes, even though I wanted Ed to look gender, ethnically and racially neutral, I needed to give him a name, and “Ed” represented Health System Education.

About Doctors in Little Black Dresses

Which leads me to my next point. We all know about the gender pay gap. Women have been railing about it for decades. Turns out that the gender pay gap is just as prevalent among physicians. This article today in FierceHealthcare states:

Reports of pay discrepancies based on physician gender have rolled in for years, as previously reported by FiercePracticeManagement. While the reason for the pay gap has long been in question, hard evidence has been virtually nonexistent, according to the current study. Researchers sought to adjust reimbursement data to account for the three primary theories accounting for the difference in pay: female physicians undervaluing their services, spending less time on the job or being less productive than their male counterparts.

As a basis for its report, the study used Medicare Fee-for-Service Provider Utilization and Payment Data Physician and Other Supplier Public Use File (PUF) data covering 13 specialties, which yielded an average pay gap of $34,125.68. Adjusting for hours worked, productivity and years of experience narrowed the gap to $18,677.23. While female physicians earned less across all specialties, two (hematology and medical oncology) showed statistically insignificant differentials. The largest gap occurred among nephrologists, at $16,688.96.

Cost and Passion is the Same for Women and Men

The cost of medical school is the same for men and women. The hard years of study, practice, relentless dedication to patients and the art of the science of medicine are the same for both sexes. If women can expect a 5 to 10 percent reduction in pay, that does not mean they will get a break on the high cost of pursuing their passion.

So with this little soapbox I’ve built over the years, let me add to the laundry list of policy issues this very critical issue of gender pay equality for physicians.